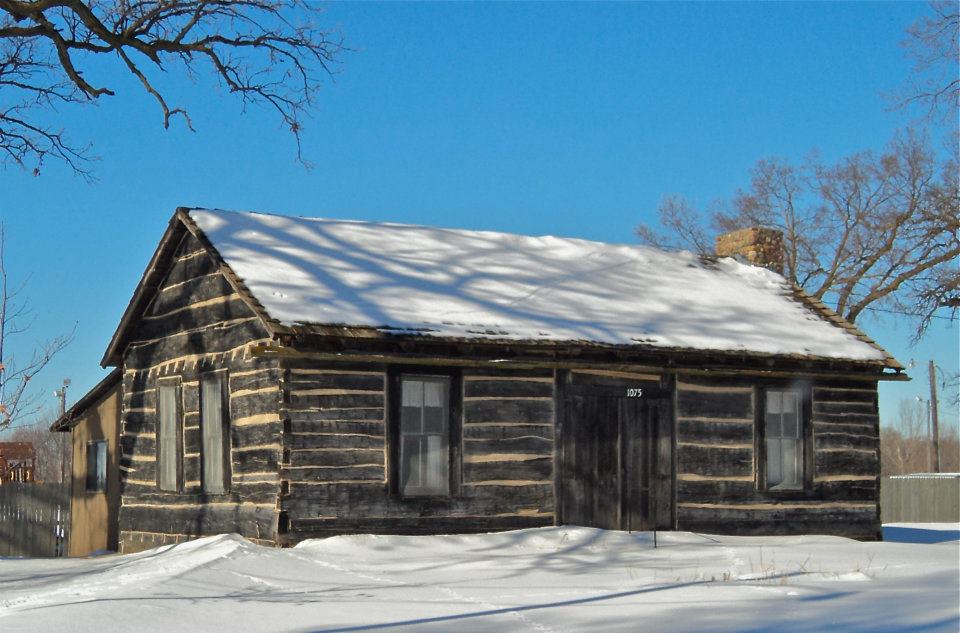 n 1933, an abandoned house was about to be demolished by the Wall Street Mission so that the lumber could be used in a boy’s camp. As workers removed the siding from the house, they discovered that the house was originally a log cabin. Reverend John P. Hantla was in charge of the project. After doing some research, he determined that the house was one of the log cabins of the Theophile Bruguier farm. The cabin was given to the City of Sioux City as an historic structure, and today it is considered to be the oldest structure in Sioux City.

In 1934 the Sioux City Parks Department and the New Deal Civil Works Administration took the old cabin down, log by log, and rebuilt it in Riverside Park as a clubhouse for the Girls of ’68 Junior Pioneers. The restored building was dedicated on June 17, 1936.

The cottonwood cabin is 35 feet long, 22 feet wide and 10 feet high. It was built in the style known as “double-log”. The hand-hewn logs were squared for a tight fit and the chinks between the logs were filled with clay. While the original fireplace may have been made of willow sticks woven together and covered with mud, a new stone fireplace and chimney were added to the cabin after it was moved. The homemade “shake” shingles on the roof are reproductions of the originals. A cement floor was also added, although the original floor was probably sand or later wood. The cabin is thought to have once had glass windows bought by Bruguier in St. Louis. Research indicates that the cabin was probably the kitchen structure in a group of five or more cabins used by Theophile Bruguier and his family. The cabin was entered into the National Register of Historic Places in 2000.